The end of the week has come around quickly, like they always do!

It seems to me, after a week of thinking about the gluten in my diet that it is easier than I thought it would be to find alternatives which are acceptable to me. Food is a huge part of my life, I have been earning my living from food for the last three years and it is my passion. I love cooking more than anything else and hope to continue to earn my living in the food industry. The idea of stopping eating many of the things I love did not appeal to me at all, but neither does ill health.

Many people are talking about our relationship with food and examining the disastrous effects of bad diets so I do not want to add to the cacophony here. If you are reading this then I am only preaching to the converted anyway. I do want to post this link to a TED speech by Jamie Oliver though. I found it really moving and interesting and hope everyone listens to what he has to say.

I also want to write a little about why people are suffering from eating wheat. I heard this story years ago and remembered it when the doctor advised me to stop eating bread. In the seventies there were fears of large scale famine in a number of countries and so money was poured into improving the yield of certain crops such as wheat, rice and soy. These endeveaours were extremely effective and as a result many people were saved from malnutrition and starvation. Norman Borlaugh, the scientist who is most associated with this work won a Nobel Prize. Some believe he saved over a billion lives, way more than anyone else has. However the changes made to wheat have made it more harmful to our bodies. The amino acids and proteins changed and there was an explosion of the numbers of people affected by wheat.

Coeliac disease and gluten intolerance are not the same thing but are horrible diseases caused by the same food and so have become so strongly associated that we often use the terms interchangeably. They are serious, often debilitating health issues which many of us underestimate. I have often heard people express disdain for others with food allergies as if it is their fault, “what is wrong with them?” I think this is the wrong question, we should be asking what is wrong with our food that it makes people so sick.

What happened to wheat is one example of how good intentions can lead to disastrous consequences. These days there are less benign forces changing our food in ways that we and they do not fully understand. I am not suggesting that science cannot help us find solutions to food production issues so that we can feed an expanding population but it is tragic that these things are not fully investigated. Even more tragic that this is largely due to the profit motive. I want to know what they are doing to the food we are all eating and why. I am not against genetic modification or growing meat in petri dishes in principle but I would like these things to be comprehensively tested before they are rolled out.

Ok from soapbox to menu:

A simple breakfast of fruit and yoghurt can be transformed with a great ingredient. Today I splashed on a little rose water to add an extra fragrance to my breakfast. I think that adding as much flavour to food as possible makes it more satisfying. I also use orange flower water or add spices such as cardamom to the yoghurt for the same reason. A basic bowl of fruit can be transformed any number of ways with a few store cupboard ingredients on hand. 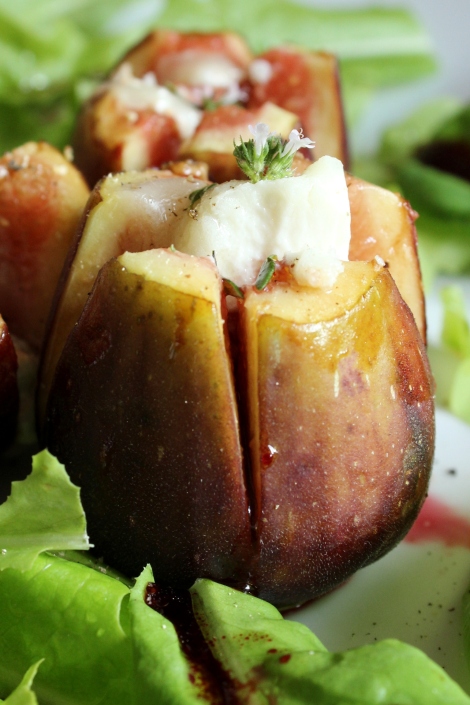 Figs and goats cheese are a classic combination. I roasted the figs and goats cheese with some balsamic vinegar and added some fresh lettuce from the garden. The dressing took about a minute to make, olive oil, balsamic, hibiscus syrup and a few thyme leaves. At the last minute I remembered to throw over some toasted pine nuts and there was a beautiful salad ready in less than ten minutes.

I decided to try incorporating gluten free baking into dinner in two ways so I made flatbread and Kofta. Any sort of meatball or ground meat kebab needs something to hold the meat together. Normally I would use breadcrumbs and egg so I did just that but with gluten free breadcrumbs. I made these with some of the bread I had left from earlier in the week. They worked really well and I could not tell a difference either when preparing or eating them. They would have been even better if dad had not incinerated them on the barbecue.

I really love mezze style meals with bread and dips and lots of dishes of tasty things to sample. I was imagining that these would be a rare treat from now on as they are not the same without bread. However the flatbreads turned out amazingly well. I enjoyed dinner immensely, even the courgette bake which I only made because we have tons of them from the garden and mum begged me to save her from more of dad’s so called “ratatouille”.

After spending ten minutes online looking for a flatbread recipe I decided to have a try at using my usual recipe with gluten free flour instead of wheat flour. I found lots of recipes on blogs and recipe sites and I guess I was feeling indecisive as I just couldn’t choose one. There is a huge variety using lots of different methods and I started to get annoyed at the sheer number of choices ( I am not a patient Googler). I decided that if I used my own recipe I would be able to assess the difference better.

Gluten free bread flour contains xantham gum which is used to mimic gluten and give the bread that elastic texture I love so much. I have to say that so far I have not noticed that happening in the other recipes I have tried the bread has been lovely in every other respect but not chewy. I therefore decided to try to increase the elasticity of my bread with some chia and linseed. These two changes were the only ones I made to this recipe which I shared on the blog a few weeks ago.

As with the gluten free pastry I made the other night, rolling was impossible. The dough is sticky and virtually impossible to handle. After making quite a mess I resorted to putting a ball of dough into the hot pan and patting it out flat as fast as I could. I managed to get a couple of small flatbreads into the pan cooking, the colour was weird, unnaturally white. At this point I did not have high hopes. When I flipped them over they looked better with small patches of colour where bubbles of air had formed. They did rise a little as the regular ones do but the colour was really putting me off. 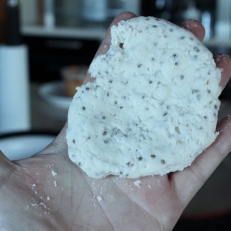 Impossible to roll out 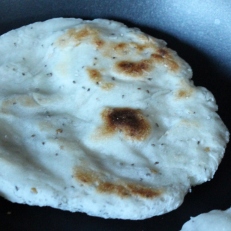 Nice colouration on the bubbles of air

Then came the moment of truth, I tore the first one apart and it felt quite elastic, I was amazed. I dipped it in some hummus for the taste test and yes this was a crispy, chewy flatbread. Nobody was more surprised than me. I feel that this is a significant success in my quest because at lunch time I reach for bread and hummus more than anything. I love it. This has been one of my weaknesses since I came home but now I can have one of my favourite things without gluten I am really happy about continuing with this diet (I hate that word), lifestyle change??? That doesn’t sound any better. I think we need a new vocabulary of cool words to describe making healthy positive changes because the current ones make me cringe. Anyway I digress. Gluten free flatbreads are in my opinion a perfectly acceptable alternative to the regular ones, break open the hummus!

This is the end of my diary but I will be continuing my gluten free investigations. I will write a post with some thoughts about of my experiences in the next few days.

Search for a recipe…