Sant Joan (or ‘St John’ as he is called in England) is celebrated with a festival in Barcelona on the 23rd and 24th of June. It’s a celebration of the summer solstice and is known as the Night of Fire. This is our first year experiencing it, so all I know so far is that it is full of fireworks, late night parties and a local treat called coca bread. 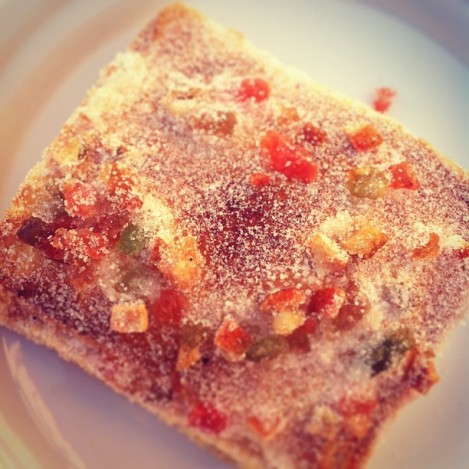 The fireworks will happen tonight, but we’ve already had chance to sample the local coca bread. This is a brioche-style bread which is filled with lots of different flavours – both savoury and sweet – including candied fruit peel, crackling, marzipan, pumpkin and more. Not all in the same one, mind you!

It is traditionally eaten with a glass of ice cold cava, but we had ours with a cup of tea – very English!

The classic Sant Joan coca bread is made with candied fruits and pine nuts. There is a recipe here if you wish to try making it yourself – just remember to make it twice as long as it is wide for an authentic finish.

The thick custard really complemented the sweet bread and the pine nuts added an interesting savoury twist. A great combination and one I think could be worth trying out in other ways – perhaps a custard and pine nut tart?

I’m sure before the festival is over we will try some more, probably in the traditional way with a glass of cold cava… well, it seems rude not to!

Hope you have a great weekend and enjoy the solstice – the shortest night of the year and the official start of summer!

Search for a recipe…